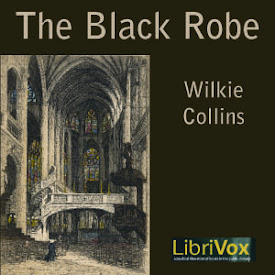 The church has lost out on a valuable piece of land through wars and transfers. Father Benwell is determined to reclaim that property by the conversion of the owner, Lewis Romayne. Enter beautiful Stella, who captures the heart of Romayne. Should Stella capture the love and devotion of Romayne, Father Benwell's scheme would fail, and that is something that he can not allow. Complicating things is the fact that both Romayne and Stella are hiding their own terrible secrets.
The Black Robe is an 1881 epistolary novel by famed English writer, Wilkie Collins. The book centers around the misadventures of Lewis Romayne, and is also noted for a perceived anti-Catholic bias (Summary by Mike Zane and Wikipedia) (12 hr 19 min)

This is a really good story. I would call it a rather dark story and you will come to truly dislike the interfering priest. The writing is so well done and you will find yourself caring about what happens to the various characters in the story. All of the narration was good, except chapter 13 which I had to fast forward through. Lars Rolandar narrates most of this and he is one of my favorites. There was also a gentlemen with I think an Irish accent that I enjoyed. I highly recommend this story.

AS GOOD AS IT GETS

One of the best by Wilkie Collins. It is unfortunate that Lars Rolander did not read all of it. The reviewer falsely prejudices the reader by alluding to an anti catholic bias. Does writing about the Duke of Alba in Holland or the Huguenot slaughters in France denote an anti catholic bent? NO. This story examines in detail one of the numerous episodes wherein the catholic church heirarchy used deception and intrigue to further its own interests; history is history.

This was an engrossing & interesting story straight to the end. I almost skipped it as I'm an atheist & thought religion would be the focus. It isn't. There just happens to be priests in the story, one who's deplorable & one who's torn between the church & doing the right thing. I got into all of the characters & cared about what happened to them. Good writing does that & this is it.

This is Wilke Collins at his best . So many twists and turns , great characters and excellent readers.

This excellent story was much appreciated in its being available as an audio. So for that I thank you. As many of the books I am listening to, these events depicted are quintessentially English and contain nuances of expression and culture are very odd being read with heavy Russian(?) and Norwegian (?) accents, In some cases very strong American accents too. These are difficult to listen to expressing the words in dialogue of for example a young English girl or woman when spoken in a strong foreign accent often with a gender cross over. Where readers have the talent and ability to take on different expressions of thoughts and emotions and different cultural qualities the listening is much enhanced. Goldfish whoever she is, is excellent. There are others - male and female - of similar quality who are enjoyable to listen to for the same reasons. The Russian (?) female reader though has such a thick accent with a great deal of mispronunciation and lack of pauses that listening was very difficult and required a lot of rewinding. She also seemed to stop enunciating and instead she mumbled very fast and incoherently, running words together in a monotone without recognising the particular cadences and rhythm of English speech. It ruined the chapter she read. Also when she reads other books. Just to help the man with the Norwegian accent: dread and thread rhyme with bed not breed. Fatigue and fatigued are pronounced fateeg and fateegd - the u is not pronounced. Eloquent has the stress on the first syllable and is pronounced EL-o-kwent. Respite has the stress on the first syllable too and is pronounced RE-spit. Perilous has the stress also on the first syllable and is pronounced PER-i-lus. Caprices has only one ces at the end and is pronounced 'cap -PRE- ces' not ca-PRE-ces-es. I congratulate them for feeling confident to read literature in a foreign language. I don't think I would consider my reading, accent , cadences and knowledge of cultural speech in another language would be found easy on the ear of listeners from other countries and languages.

This story was different in some ways from other Wilkie Collins books, but it was probably one of his better books. His writing and plot twists get under your skin, and make it really hard to not listen all the time. There were even times when I was so invested in what was happening, that I literally was jumping up with excitement, or feeling anxiety for the characters. My husband also knew exactly what was going on as it was going on, because when I couldn't listen to it, I had a hard time not talking about it! Such a good glimpse into historical methods employed by the Catholic Church as well. I highly recommend listening!

Another Wilkie Collins roped me right in and tough to put down story. Much as the scheming Jesuit priest unnerved me at times, I enjoyed this story with its mix of characters and plot threads. I like that Collins always develops a strong protagonist and strong supporting players that readers identify with I also enjoy the chance encounters that magically bring key characters and circumstances together-an endearing aspect of Victorian fiction that Collins uses deftly. I’ll be sad when I run out ofCollins’s audiobooks!

I LOVED this story

and I am not sure why I didn't review it earlier. I did the PL for it, so the readers were great, and the ending is GREAT, I loved it, I almost was jumping up and down at the one part, but I wont' spoil it for you. :-) Sometimes you just get into a book, and this one is just such a book. Enjoy!