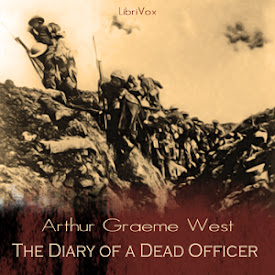 The Diary of a Dead Officer

Published posthumously in 1919, this collection of diary entries presents a scathing picture of army life and is said to be one of the most vivid accounts of daily life in the trenches. It chronicles West's increasing disillusion with war and his move toward pacifist and atheist beliefs. The final part consists of his powerful war poems, including God, How I Hate You, You Young Cheerful Men, and Night Patrol. West was killed by a sniper in 1917. In view of some of his poems, one wonders if death was not unwelcome. (Introduction adapted from Wikipedia by Ruth Golding) (3 hr 43 min)

war is not pretty, nor glamorous

most books about war talk about the 'big picture'... not so in this case, we get the daily grind of the soldier

Arthur Graeme West considered God to be “a malignant practical joker, or at best, an indifferent spectator of the woes of the world.” Whether these are his own words or those of the editor is unclear. It is an accurate assessment, anyway, in light of his diary. Though inconsistent with a denial of God’s existence, the statement is in line with what atheists, in general, say. The illogical curse to a non-existent being, says West, happens only because the constant references to his beneficence are so maddening. That rhetoric sounds like it could have come straight from the pens of our most modern atheists. Incidentally, this diary sounds more contemporary than a century old; there is almost nothing in it but the mention of a gramophone to remind us that it was written during the First World War. The last part of the diary contains the dead officer’s poems. They are not remarkable except in portions, which criticism holds true for most poets, no matter the epoch. The reader’s voice (Ruth Golding’s) rises and falls appropriately throughout the whole diary, and she puts a twang in her voice in the right places. She is at her best, though, when reading the poems. Due in part to her, the feelings of this dead poet ring out like reverberations from his departed soul. Happily, in the midst of this poetry’s scathing criticisms of God, there may be found lines that dramatize God positively and magnificently. A poet will not let his false beliefs discolor every line: “See how He swings His great suns through the sky, / See how He hammers the proud-faced mountains flat.” This book is rather dark. But it is a solemn book to wrestle with, and it has its lighter moments. The style is attractive. It is read with feeling. And Ruth Golding’s cadence is as good as the rhythm in ‘the tramp of deities and mark of time.’ The most touching part of this doleful narrative is a scene describing a day that the author spent with his sister while on leave. Upon the grass reading ballads to each other, they get lost in the wonder of that exercise until something that is read snaps them into reality once more. This seems to have been one of those experiences during which time feels suspended, an almost mystical occasion, perhaps, and which communion Officer West calls ‘intimate aloofness.’ This oxymoron befits a description of this diary he left behind, for in it, Arthur Graeme West shares intimately, but with a dejected temper. The character of this diary is at once intimate and aloof.

The Diary of a Dead Officer

<br /><a href="http://en.wikipedia.org/wiki/Arthur_Graeme_West" rel="nofollow">Arthur Graeme West</a> was an English soldier and poet who died in the trenches of France in 1917, from a sniper bullet. He left behind a mass of papers which his friends turned into a book soon after the war. It contains scattered diary entries, not really a memoir, and a collection of poems, the most famous being <a href="http://www.archive.org/stream/diaryofdeadoffic00westrich#page/80/mode/2up" rel="nofollow">`The Night Patrol`</a><blockquote>And we placed our hands on the topmost sand-bags, leapt, and stood.<br />Wormed our selves tinkling through, glanced back, and dropped.<br />The sodden ground was splashed with shallow pools,<br />And tufts of crackling cornstalks, two years old, <br />No man had reaped, and patches of spring grass.</blockquote>In West's diary we see how he changes over time, from a patriotic soldier to a strong anti-war thinker, from religious believer to atheist, as he becomes increasingly despondent at the futility and waste of war. He sees the greatest purpose in life as the opposite of pain, namely pleasure (physical, mental), and anyone who denies that pleasure (which he calls happiness) has no right to do so. He was about 50 years ahead of his time, the entire baby boomer generation would say the same thing during the 1960s. His book was published in 1919 and it received some attention at the time, but more so recently, he's today probably considered a minor author of the WWI canon. Listen via the always wonderful narrator <a href="http://www.archive.org/details/diary_dead_officer_rg_librivox" rel="nofollow">Ruth Golding at LibriVox</a>, with <a href="http://www.archive.org/details/diaryofdeadoffic00westrich" rel="nofollow">original text as scanned book</a> at Internet Archive. [STB | 11-2010 | 525]

Diary of a Dead Officers

The treatment of the soldiers by Officers made me wish I could of shoot those Officers .. I am still pissed & it's been 100 yrs .. Thanks to the reader Ruth Golding & LibriVox for all the wonderful free books 😆

well that was a jolly book !!!!!!! but i will admit a bit thought provoking at times. but the reader was good spoke very clearly and easy to follow.

the author appears to be a disgruntled closet homosexual

Good but read way too slooowly

An informative peek into the mind of a WWI soldier. This war was doubtlessly the most psychologically challenging of the European era. We see a vivid downward mental spiral of one who was least able to cope with it. The poems were especially depressing. Be prepared for a downer if you read it.