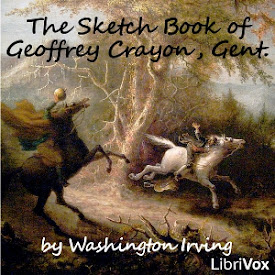 Apart from "Rip Van Winkle" and "The Legend of Sleepy Hollow" - the pieces which made both Irving and The Sketch Book famous - other tales include "Roscoe", "The Broken Heart", "The Art of Book-making", "A Royal Poet", "The Spectre Bridegroom", "Westminster Abbey", "Little Britain", and "John Bull". His stories were highly influenced by German folktales, with "The Legend of Sleepy Hollow" being inspired by a folktale recorded by Karl Musäus. Stories range from the maudlin (such as "The Wife" and "The Widow and Her Son") to the picaresque ("Little Britain") and the comical ("The Mutability of Literature"), but the common thread running through The Sketch Book — and a key part of its attraction to readers — is the personality of Irving's pseudonymous narrator, Geoffrey Crayon. Erudite, charming, and never one to make himself more interesting than his tales, Crayon holds The Sketch Book together through the sheer power of his personality - and Irving would, for the rest of his life, seamlessly enmesh Crayon's persona with his own public reputation. (Introduction by Wikipedia) (15 hr 20 min)

15 - The Mutability of Literature

A more diverse collection is difficult to imagine. There is something for everyone, and, though it is highly improbable that any reader would enjoy every story, I feel that most readers would enjoy most of them. In my particular case I especially appreciated the commentary on King Phillip's war.

This book has a lot of charming parts - I especially enjoyed the old-fashioned English Christmas. However, I couldn't help but make the comparison with Irving's book on the Alhambra on the one hand (a truly fine book through and through, where the essays and stories are perfectly meshed) and Nathanial Hawthorne's Our Old Home on the other (another look at England through the eyes of an American). Hawthorne is just so much more observant, open to fresh detail, and all around interesting. Altogether, this book disappointed me. The readers were good though

Not what I expected at all

A very English book for an early light in the American literary scene. Contents a very strange admixture. Ghost stories, as you'd expect, and tales like Rip van Winkle, but literary criticism of the love poetry of an obscure Scottish king? Thoughts on English customary funereal practicies? Basically he just threw together anything that wasa bit colourful, so far as I can see. So, good, but wordy, so you'll need to be a patient listener to really enjoy this.