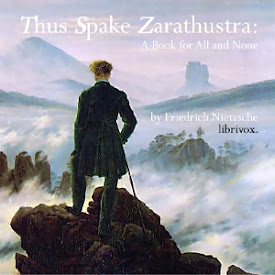 Thus Spake Zarathustra: A Book for All and None

Friedrich Wilhelm Nietzsche (1844–1900) was a nineteenth-century German philosopher. He wrote critical texts on religion, morality, contemporary culture, philosophy and science, using a distinctive German language style and displaying a fondness for aphorism. Nietzsche's influence remains substantial within and beyond philosophy, notably in existentialism and postmodernism.

Thus Spake Zarathustra (Also sprach Zarathustra), is a work composed in four parts between 1883 and 1885. Much of the work deals with ideas such as the "eternal recurrence of the same", the parable on the "death of God", and the "prophecy" of the Overman, which were first introduced in The Gay Science. Described by Nietzsche himself as "the deepest ever written", the book is a dense and esoteric treatise on philosophy and morality, featuring as protagonist a fictionalized Zarathustra. A central irony of the text is that the style of the Bible is used by Nietzsche to present ideas of his which fundamentally oppose Judaeo-Christian morality and tradition. (Summary from Wikipedia) (12 hr 39 min)

Part 1: I. The Three Metamorphoses

Part 1: IV. The Despisers of the Body

Part 1: VIII. The Tree on the Hill

Part 1: IX. The Preachers of Death

Part 1: XII. The Flies in the Market-place

Part 1: XV. The Thousand and One Goals

Part 1: XVII. The Way of the Creating One

Part 1: XIX. The Bite of the Adder

Part 2: XXIII. The Child with the Mirror

Part 2: XXIV. In the Happy Isles

Part 2: XXXV. The Sublime Ones

Part 2: XXXVI. The Land of Culture

Part 3: XLVI. The Vision and the Enigma

Part 3: LV. The Spirit of Gravity

Part 4: LXII. The Cry of Distress

Part 4: LXIII. Talk with the Kings

Part 4: LXVI. Out of Service

Part 4: LXXIV. The Song of Melancholy

Part 4: LXXVI. Among Daughters of the Desert

Read by The Purple Poodle

This was the last book i needed to read to complete the Nietzsche collection and it didn't disappoint. i guess it's time to move on to a new Philosopher.

What does it all mean??!

Thank thanks to all the volunteers who read this. This work is a treasure trove of wisdom and thanks to Librivox, long trips in the car have become a lot more engaging. Nietzsche is like a Western Confucius. Compare the ideas and symbols in this novel with those of Twilight of the Idols, Beyond Good and Evil, and the Will to Power and common threads starr becoming apparent.

The existential crisis of existence is white privilege. Nowhere does this Zarutha ever come to terms with the phalogocentric western structures of oppression that entrap BIPOCs in a never ending cycle of hopelessness. We need to rewrite this book to be inclusive of BIPOC and 2SLGBTQTIAWSWWM+- voices. Rewrite the text so every paragraph has an imprecation against whiteness

Mixed quality of readers, some with background street noise, or poorly read, but generally acceptable. The importance of the work for Nietzsche studies and the quality of the work though make it indispensable.

A noble effort, but a few of the readers were hard to follow.

Although some of the recordings had some annoyances overall good reading.

Some readings were good, though inconsistent in tone, volume and speed. Naturally, many are going to disagree with Nietzsche on two of his main premises without much reflection on the arguments. The “God is dead” proposition normally is phrased without its qualifications, namely, because He died of shame of his human creations’ shortcomings, or because all the gods laughed each other out of existence. There are very few arguments for atheism in the book, contrary to one’s expectations. Of course, the whole proposition is poetic parody, specifically made to stir up a great theological controversy, without which few would have ever heard the name Nietzsche. (Marketing. Let’s be real.) The real main proposition is that man must be surpassed, and that to do this, we must become harder, stronger and more evil. He disputes that our average definition of evil is undesirable and often asserts that much bad is done by the ‘good’ who suppress the individual interests, which halts progress. Perhaps this is true to an extent, but Nietzsche gives no account of how progress would be made in a world where individual interests are to be halted at every step by moral and civil chaos. A Higher Man would be nothing more than the strongest caveman, because organized society and would be impossible. The ‘good’ are the ones who aid the ‘great’ by making society, (and therefore their armies) work. Alone, even a very strong man is a middling animal, and even a tiger cannot always be unassailable. Ultimately, Nietzsche’s ideal human is unattainable, for an equal and opposite reason as Marx’s is unattainable. Nietzsche misunderstood and oversimplified human nature, putting too much faith in unquestioned aggression, where Marx put too much faith in unquestioned cooperation. Humanity falls between these two extremes, each person falling somewhere in that spectrum. Humanity will certainly evolve if it doesn’t destroy itself first, but whether you call them virtues or sins, both aggression and cooperation will remain. But all that nuance is not to found here. I feel Nietzsche is at his best when writing poetry to nature, less idealized than in Romantic poets of his time. There are several interesting moments, such as between the Last Pope and Zarathustra, and some genuinely good satire, such as the Ass-Festival. Much of the rest feels disconnected and occasionally even contrary to the central themes. It is essential reading for anyone studying Western philosophy, but to me, little more than a chore. (I was dared by a friend.) Sorry, that was a longer review than was intended.