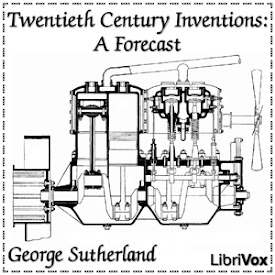 This work from 1901 predicts what technological developments will manifest in the twentieth century. The author, a technical journalist, presents ideas for inventions and new developments in the areas of power, transportation, agriculture, mining, domestic applications, electronic devices, warfare, music, art, and news. Many have come to pass. All of them provide an interesting look into how the next century was imagined and what challenges were anticipated for the progress of society. -(Summary by A. Gramour) (6 hr 42 min)

Remarkable in that this turn of the 20th century prognosticator got almost everything wrong. Lighter than air and heavier than air flight was an utter waste of time that never would amount to anything. The submarine had no future, and the main use of radio would be to set clocks. The bayonet would make a comeback as the most effective infantry weapon. Transatlantic liners would get much smaller (This was shortly before the dawn of giants like Titanic.) Against all this he did accurately predict the newspaper vending machine. Though well-versed in the technology of his time, the author was anything but a visionary, and his book is recommended as a fascinating example of woodenheaded thinking. Good readers.

This book was written in 1901. This is a very interesting book. I learned about how things were first used. Also the readers do a great job.

There is a novel in this somewhere

The author gets a great deal wrong, to be sure, and is so racist it makes his predictions gibberish on military matters, but his complete failure to understand the importance of petrol gives his work a lovely steampunk feel. Often he gets within striking distance of being correct about a machine, only to fly down some bizarre side alley. Seriously racist, though. Past just being pro-British racist, and out the other side as delusional as to how real people act.

wow most amazing things I've ever had read to me. Thank You!!!