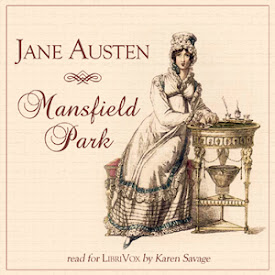 Miss Frances, the youngest Ward sister, "married, in the common phrase, to disoblige her family, and by fixing on a lieutenant of marines, without education, fortune, or connexions, did it very thoroughly. She could hardly have made a more untoward choice." Some years later, pregnant with her ninth child, Mrs. Price appeals to her family, namely to her eldest sister and her husband, Sir Thomas Bertram, for help with her over-large family. Sir Thomas provides assistance in helping his nephews into lines of work suitable to their education, and takes his eldest niece, Fanny Price, then ten years old, into his home to raise with his own children. It is Fanny's story we follow in Mansfield Park. (Summary by Karen Savage with text from Mansfield Park) (14 hr 27 min)

I definitely enjoyed listening to Mansfield Park. It has some Cinderella qualities, and Jane Austen effectively makes you love Fanny because so few people do. However, this is the third Austen book I’ve read and I’ve begun to notice repeating themes, such as unwanted suitor, scandal, and marriage. I was very disappointed that Fanny’s family wasn’t considerate of and kind to her after not seeing her for almost ten years! Also it was rather difficult for me to believe that a clever, principled young man like Edmund could so easily be enchanted by Miss Crawford. And I would’ve liked more time to develop the relationship between Fanny and Edmund. It felt like and afterthought, jammed into the last chapter. All in all, though, I really liked the book and Karen Savage is the epitome of volunteer narrating. Keep in mind that to understand this book, you have to remember historical context, because the book deals more with rank and money than any other Austen I’ve read. But I would and will read/listen to it again!

I love listening to Karen Savage and Jane Austen novels and hope there would be more :) Mansfield Park is a bit less popular but especially after listening/reading multiple times and reflection it gains affection, just as Fanny does ;)

amazing reader second time I've read the book first time I've listened. will listen to it again and again. so soothing too!

Narrator gets all the 5 stars ✨

4.5 stars for the quality of the audiobook and the narrator's skilled presentation. As usual, Karen Savage does not disappoint. Honestly, every time I listen to her performance I can't believe LibriVox is free. As for the text itself… I'm not quite sure how I feel about it. I don't find the plot to be anything special but at the same time I'm amazed that Austen managed to write this story in such a way that caught then sustained my interest. Her words combined with Karen Savage's narration transported me, and for five days I lived in Mansfield Park inside Fanny Price's head.

For me, this is the harvest of Austen's novels to get my head around, as it's the one furthest away from 21st century perspectives. But that's OK - the novel wasn't written for the 21st century. However, the reader, Karen Savage, is unbelievably gifted in clarity and personification of the many characters. So, it becomes easier to immerse oneself in the world of the novel. An excellent reading of a tricky novel.

An extraordinary performance by Karen Savage

I often prefer reading to audiobooks. However, Ms. Savage's rendition not only does justice to the novel, but imho, even elevates it. Each character was impeccably voiced. The story itself, I feel, focuses more on upbringing, society and personal growth (or a lack of it at times) than the romance and is more delightful when read/heard with that in mind.

Ms. Savage is an outstanding reader. Her deep understanding of the text and characters of Mansfield Park, along with her excellence as a voice actress, make her reading of the novel a complete delight. It's as though Jane Austen herself was reading to you. Many, many thanks, Ms. Savage!!

Karen Savage voices all of Jane Austin’s characters impeccably. I listened to her rendition a few years after having read the book, which I had really enjoyed for its Victorian sensibilities and Jane Austen’s powerful pen. The Austen-Savage team makes this delightful story shine.