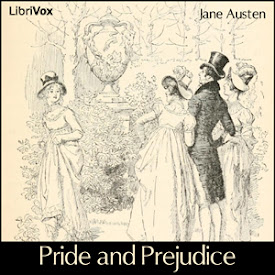 Pride and Prejudice is a novel by Jane Austen, first published in 1813. The story follows the main character Elizabeth Bennet as she deals with issues of manners, upbringing, morality, education and marriage in the society of the landed gentry of early 19th-century England. Elizabeth is the second of five daughters of a country gentleman, living near the fictional town of Meryton in Hertfordshire, near London.

In this reading, Librivox volunteers lend their voices to dramatize Jane Austen's classic and well-loved novel. (Summary by Wikipedia and wildemoose)

I thought this was a was a lovely rendition of an audio book. I really enjoyed having a wide cast of people read the parts as they did. I enjoyed the book so much more...it made you more vested in the characters. The only problem with it, however, is that as wonderfully vested as you get in the well-read characters, the poorly read parts made it that much worse. The parts of Elizabeth, Jane, Bingley and Darcy were fantastic (esp Lizzy) but the parts of Caroline Bingley and Mrs. Gardiner were like nails on a chalkboard (esp Mrs Gardiner...she sounded like a fake automated phone operator). But overall it was good. Enjoyed very much!

good but a couple actors

I loved this but for 2 of the actors. Mr. Wickham's voice actor sounded much to old and formal to be comfortably accepted as him, and Mrs. Gardner sounded as though every sentence was a question and put inflection in the most strange places so that it was most painful to get past her speaking points

Love how there is a different voice actor for each character, so it is easier to listen to, by that I mean you're not thinking about if the narrator of the story is reading simple descriptive text or dialogue. As well you don't have to concentrate on who is saying what , given the voice recognition helps you create a better mental visual of what's going on, especially for me since I fall asleep listening to LibroVox. I love this site/app ð

While the three primary readers were quite good (Narrator, Elizabeth, Darcy), and others decent (Mrs. Bennett, Jane, Bingley, many others), there were a few catastrophic surprises. The three most difficult to listen to were Mr. Collins, Miss Bingley, and (by a landslide) Mrs. Gardiner. Be prepared, as a listener, for some shockingly painful segments in an otherwise decently-read audio book.

Great but Mrs. Gardiners part sounds very strange. The weird highs and lows of TriciaG sounds unnatural. It made those parts painful to endure.

I LOVE having different voices for each person. That really helped me tell apart the characters, and it made it almost feel like a movie playing out in my head. The main voices all did very well. My main problem was Mrs. Gardiner and a few others (but mostly her!) She made every sentence sound like a question. It was very bad! Other than her, the person playing Mr. Collins had an audio much louder than the others, so I had to lower the volume a lot whenever he talked. Over all though, I really enjoyed this. Especially the voices actors playing the main characters. They were wonderful!

I gave it a chance cus Mil was one of the contributors (I loved her reading of Dombey and Son) and did not regret it. Loved the book, and the reading.

Can't listen/read this book enough! Loved the dramatic reading. The voice actors were wonderful and personified the characters very well. I definitely recommend this version.