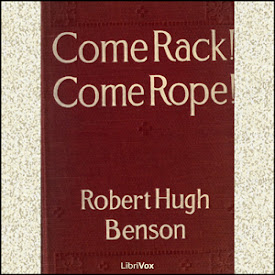 Come Rack! Come Rope! is a historical novel by the English priest and writer Robert Hugh Benson, a convert to Catholicism from Anglicanism. Set in Derbyshire at the time of the Elizabethan persecution of Catholics, when being or harboring a priest was considered treason and was punishable with death, it tells the story of two young lovers who give up their chance of happiness together, choosing instead to face imprisonment and martyrdom, so that "God's will" may be done.

The book was written nearly nine years after Benson's reception into the Catholic Church. The inspiration for the story comes from Dom Bede Camm's account of the recusant Fitzherbert family in Forgotten Shrines (1910), and from Benson's own visit in 1911 to Padley, home of the Fitzherberts, and scene of part of the novel, in order to preach at the annual pilgrimage there. The title of the book is taken from a letter of Saint Edmund Campion in which, after torture, he assured Catholics that he had revealed "no things of secret, nor would he, come rack, come rope." Most of the characters in the book are historical people; only the hero and heroine, their parents, and some minor characters are fictional. (Summary adapted from Wikipedia) (14 hr 21 min)

This is a moving and thought provoking story of a man's life across many years and his strong religious conviction and sense of duty. Set in the context of the English reformation under Queen Elizabeth I and the terrible way catholics were pursued and persecuted, the author provides great detail and insight into the times and how relationships were tested and even broken. Many show such unbelievable courage and conviction for their faith. I was soon invested in the characters and their fates. The story is narrated substatially by one person who did a good job. This is a solid historical novel well worth a listen.

Thank you so much! The reading was excellent and the writing is extraordinarily compelling. This story may not be as well known as other but it is certainly top notch

Very impressive story. It's mostly based on true history, but the two main characters are fictional.

excellent story, history at its most vivid and xceedingly reveal