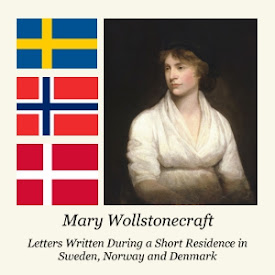 Letters Written During a Short Residence in Sweden, Norway and Denmark

Published in 1796, Letters Written During a Short Residence in Sweden, Norway, and Denmark is a personal travel narrative by the eighteenth-century British feminist writer Mary Wollstonecraft. The twenty-five letters cover a wide range of topics, from sociological reflections on Scandinavia and its peoples to philosophical questions regarding identity. Published by Wollstonecraft's career-long publisher, Joseph Johnson, it was the last work issued during her lifetime.

Wollstonecraft undertook her tour of Sweden, Norway, and Denmark in order to retrieve a stolen treasure ship for her lover, Gilbert Imlay. Believing that the journey would restore their strained relationship, she eagerly set off. However, over the course of the three months she spent in Scandinavia, she realized that Imlay had no intention of renewing the relationship. The letters, which constitute the text, drawn from her journal and from missives she sent to Imlay, reflect her anger and melancholy over his repeated betrayals. Letters Written in Sweden, Norway, and Denmark is therefore both a travel narrative and an autobiographical memoir.

Using the rhetoric of the sublime, Wollstonecraft explores the relationship between self and society in the text. She values subjective experience, particularly in relation to nature; champions the liberation and education of women; and illustrates the detrimental effects of commerce on society.

Letters Written in Sweden, Norway, and Denmark was Wollstonecraft's most popular book in the 1790s—it sold well and was reviewed favorably by most critics.

Wollstonecraft's future husband, philosopher William Godwin, wrote: "If ever there was a book calculated to make a man in love with its author, this appears to me to be the book."

The book also influenced Romantic poets such as William Wordsworth and Samuel Taylor Coleridge, who drew on its themes and its aesthetic. While the book initially inspired readers to travel to Scandinavia, it failed to retain its popularity after the publication of Godwin's Memoirs of the Author of A Vindication of the Rights of Woman in 1798, which revealed Wollstonecraft's unorthodox private life." (Summary from Wikipedia, revised a little by Stav Nisser.) (5 hr 47 min)

The quality of the recording is, with the exception of a few letters, excellent. Nice lyrical description of Scandinavia, but what truly makes this travelogue fascinating and poignant is the backstory of MW's romance with Imlay as we hear her hope for its future dwindle with each letter and finally turn bitter.