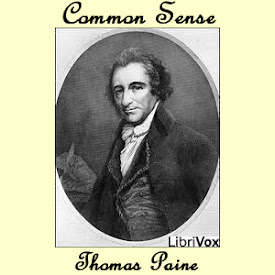 Thomas Paine has a claim to the title The Father of the American Revolution because of Common Sense, the pro-independence monograph pamphlet he anonymously published on January 10, 1776; signed "Written by an Englishman", the pamphlet became an immediate success. It quickly spread among the literate, and, in three months, 100,000 copies (estimated 500,000 total including pirated editions sold during the course of the Revolution) sold throughout the American British colonies (with only two million free inhabitants), making it the best-selling book ever. Paine's original title for the pamphlet was Plain Truth; Paine's friend, pro-independence advocate Benjamin Rush, suggested Common Sense instead.

The pamphlet appeared in January 1776, after the Revolution had started. It was passed around, and often read aloud in taverns, contributing significantly to spreading the idea of republicanism, bolstering enthusiasm for separation from Britain, and encouraging recruitment for the Continental Army. Paine provided a new and convincing argument for independence by advocating a complete break with history. Common Sense is oriented to the future in a way that compels the reader to make an immediate choice. It offers a solution for Americans disgusted and alarmed at the threat of tyranny. (Introduction by Wikipedia) (2 hr 25 min)

Introduction/Of The Origin And Design Of Government In General, With Concise Re…

Of Monarchy And Hereditary Succession

Thoughts On The Present State Of American Affairs

Of The Present Ability Of America, With Some Miscellaneous Reflections

Bob neufled I sincerely hope this review reaches you, every book should be narrated by you. I sense an element of mastery and hard work in your narration, someone that has put a lot of time and effort in perfecting the craft and books you read which is rare in narrating. I can sincerely say you equal the work you read, if you know what I mean. I often search for the books you narrate and so hope you do much more narrations you would be regarded as the best I'm sure of it once it's spreads across the Internet. Emerson's The conduct of life is a book I would take delight in hearing you put to voice, his eloquence dare I say suits your voice, anyway thank you so much for the gift!

The narrator displays a familiarity, passion, and professionalism rarely rivaled by LibriVox volunteers! This was a masterful recording by a gentleman who obviously loves the text he is reading!

The narration is absolutely superb, he could read an oven manual and it would be riveting. The fact that the book is great as well means that this is well worth your time. Good read for history buffs, politics buffs, and anyone interested in America and its founding.

I first read this book in the 6th grade. I'm 51 yrs old now & if Americans would but pay attention. .we could be free again

Very well read, and quite appropriate even today.

Wow. Just wow! I’ve first come across this auditory bliss on YouTube several years ago. I am a millennial and this prose it’s electrifying content is superb! I write as one who dearly loves America. I am appreciative of the standard of living it affords me, and more importantly, the opportunity to pursue that which I desire. Mr. Neufeld truly brings Mr. Paine to life in this recording. I recommend it for everyone. It deserves reading and reflection. Thank you Mr Neufeld for your amazing reading, even more so, thank you Mr. Paine for your fiery and timely language.

Check out Bob nuefeld reading Tess of the d’urbevilles if you think Bob is one of the best readers ; just the right voice for this sort of book and I’ve listened to most of his works. This book however isn’t one of my favourite pieces of work but has some interesting points