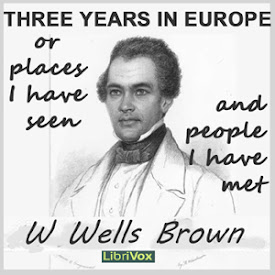 William Wells Brown was born a slave, near Lexington, Kentucky. His mother, Elizabeth, was a slave--his father a white man who never acknowledged his paternity. Brown escaped slavery at about the age of 20. For many years he worked as a steamboatman and as a conductor for the Underground Railroad in Buffalo, New York. In 1843, he became a lecturer for the Western New York Anti-Slavery Society, and was a contemporary of Frederick Douglass.

Brown went to Europe in 1849 to encourage British support for the anti-slavery movement in the United States. He remained there until 1854 when British abolitionists purchased his freedom. Soon afterward, he returned to the United States to continue his work in the abolitionist movement.

Throughout his life, he wrote several books, including his autobiography, Clotel, and, The Rising Son; or, The Antecedents and Advancement of the Colored Race, among others. He was also the author of two plays.

Three Years In Europe; Or, Places I Have Seen and People I Have Met is a series of letters that Brown wrote to certain of his friends. A few were destined for publication in The Liberator, the famed abolitionist journal published by Frederick Douglass. In the letters, Brown described his impressions while traveling across Europe, meeting and sharing his experiences first as a slave and then as a fugitive. (Introduction by James K. White) (7 hr 37 min)

William Wells Brown had a gift with the pen as these letters were eloquently written in such rich detail, beautifully describing the sights and people he came across during his travels, as well as giving insight on what life was like as a slave. The narration by James K. White was excellent.

Charmingly written and educational at the se time.

really enjoyed this book, as I am an American living in Europe, I found it interesting to hear abput how things were on both sides of the Atlantic, and btween thr USA and Great Britain. And how slaves.were treated so differetnly in each side as well. Reader did a great job!