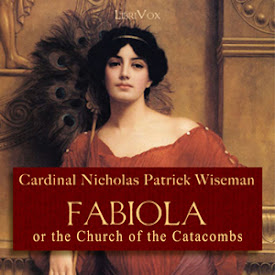 Fabiola or The Church of the Catacombs

This historical novel is set in Rome in the early 4th century AD, during the time of the cruel persecution of Christians under the Emperor Diocletian.

The heroine of the book is Fabiola, a young pagan beauty from a noble Roman family. Fabiola seems to have everything, including a superior education in the philosophers, yet under the surface, she is not content with her life. One day, in a fit of rage, she attacks and wounds her slave girl Syra, who is a secret Christian. The proud, spoiled Roman girl is humbled by Syra's humility, maturity and devotion to her in this situation, and a slow transformation begins.

Woven into this fictitious story are a number of martyrdom accounts of real-life Christian saints, including Saint Agnes, Saint Tarcisius and Saint Sebastian.

Cardinal Wiseman wrote Fabiola in part as an answer to the vigorously anti-Catholic book Hypatia by Charles Kingsley. The novel was mainly aimed at the embattled Catholic minority in England, who had recently emerged from a half-illegal status. (Summary adapted from Wikipedia) (13 hr 29 min)

22 - What Diogenes Could Not Tell About the Catacombs

23 - What Diogenes Did Tell About the Catacombs

29 - The Ordination in December

47 - The Critical Day: Its First Part

54 - The Stranger From the East

55 - The Stranger From Rome

It was truly inspirational. I liked it very much.