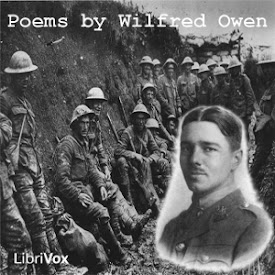 A collection of poems by the English war poet and soldier of the First World War, Wilfred Owen. Owen is regarded by historians as the leading poet of the First World War, known for his war poetry on the horrors of trench and gas warfare. It stood in stark contrast to both the public perception of war at the time, and to the confidently patriotic verse written earlier by war poets such as Rupert Brooke. Only five of Owen's poems had been published before his death, one of which was in fragmentary form. Only one week before the end of the war, whilst attempting to traverse a canal, he was shot in the head and killed. (Summary modified from Wikipedia) (0 hr 56 min)

06 - Parable of the Old Men and the Young

Owen's poetry -- well-read on the whole

With a few exceptions, these poems -- all among the greatest lines ever scrawled during the Great War -- are read with all the solemnity, bitter humor and pity they deserve. I personally would've preferred more English readers, but the American readers generally do a better job than not.

This Librivox offering deserves a huge audience, especially among the many young people who study these poems. Most of the readers give very fine renditions of these beautiful and terrible verses.