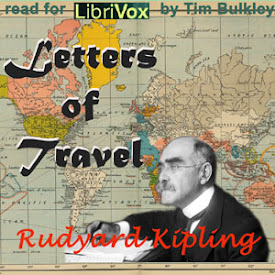 Three books of travel writing (between them covering the USA, Canada, Japan and Egypt) by the Nobel Prize winning author of the Just So Stories and the Jungle Book. Rudyard Kipling (an Englishman born and raised in India) offers an interesting outsider's view of the places he visits, candid and sharp witted, yet with a deep humanity.

Letters of Travel comprises three books: From Tideway to Tideway 1892-95 contains pieces first published in the Times covering voyages across north America (USA and Canada) and in Japan; his Letters to the Family first appeared in the Morning Post, while Nash's Magazine was the first publisher of the articles (on Egypt and Sudan) in Egypt of the Magicians.

Kipling's observations are cast in a wry style that permits, as his work often does, different readings. The unsympathetic reader can hear a banal repetition of the patriarchal, racist and imperialist ideas of the late nineteenth and early twentieth century trotted out. (Or even in his characterisation of the Jewish power behind the pedlar in "The Face of the Desert" a suggestion of something worse.) A more nuanced reading will perceive an amused or wry smile in Kipling's remembering and the human sympathy that infuses all his writing. (US listeners should be warned that in Kipling's day "the N word" was in common use, and he therefore uses it naturally to describe people of Sub-Saharan African ancestry.)

A paragraph in the "letter" written on Kipling's arrival in Japan might serve as example. It closes: "The father-fisher has it by the pink hind leg, and this time it is tucked away, all but the top-knot, out of sight among umber nets and sepia cordage. Being an Oriental it makes no protest, and the boat scuds out to join the little fleet in the offing." With its flippant tone ("all but the top-knot"), impersonal reference ("it" rather than he or she) and use of racial terms ("Oriental") and stereotypes ("makes no protest") this can be presented as an example of the worst of Victorian Imperialist prejudice.

And yet... as the fisher family are introduced, not only was "the perfect order and propriety of the housekeeping" noted but mention was made of "a largish Japanese doll, price two shillings and threepence in Bayswater", which turns out to be a baby. At first glance this is merely another example of Western bigotry. Note however the words Kipling uses to show us that this is not in fact a doll: "The doll wakes, turns into a Japanese baby something more valuable than money could buy". The "Japanese doll" is a priceless human child and not a commodity to be bought in Bayswater.

Perhaps the prejudice is not so much on the surface of Kipling's writing as under the surface of the reader's presuppositions? Time and again wry observation turns the familiar world into something fresh, and reminds the reader of shared humanity with the strange and foreign people being observed. Kipling as a tourist is no mere gawker whether in strange yet familiar Yokohama or in foreign Vermont. (Summary by Tim Bulkeley) (7 hr 44 min)

The Edge of the East

On One Side Only

Leaves from a Winter Note-Book

A People at Home

Mountains and the Pacific

A Return to the East

A Serpent of Old Nile

The Face of the Desert

The Riddle of Empire

Excellent book but impossible to understand accent of the reader! I was unable to finish it despite slowing the speed. So disappointed, as I live Kipling’s writing.

I’ve read a little bit of Kipling, and so I have much the same view of him as most people who have read only a little bit of Kipling, so this book was a real eye opener. He isn’t an archetype. I’ve always thought that Kipling’s British boosterism was basically pro-English, but here we find it isn’t. He really sees himself as British first, and uses the Canadian form of Britishness to severely critique the English form, which is less robust, in his opinion. He’s also familiar with Australia and New Zealand to a surprising degree, and thinks Melbourne’s brilliant. This was not a widely held opinion at the time among Londoners. So, he was pro-Imperial, but he was odd about it. He thought the British were the business, but at the same time, his idea of what was British is very nebulous. He’s not nearly as strident as I expected. I particularly enjoyed Captains Courageous, where he points out that the heroes of the next generation are alive and working now. I’m not saying he invented steampunk, but he clearly was onto something is claiming that the stories of great deeds in his own time are not romances. Good for steampunkers looking at the source material, enthusiasts of travel writing, and Canadians .

Kipling was surely one of the finest travel writers of all time. These letters capture time, place, and attitude brilliantly. On the political right even in his own era, Kipling had something that some contemporary conservatives seem to lack: a sense of humour! I commend the listener also to Tim B.'s summary, which brings out some of Kipling's complexity, and recommend his poem "The Buddha at Kamakura" for insight into the mind of a compassionate imperialist. http://themargins.net/anth/19thc/kipling.html Tim Bulkeley has a wonderfully eccentric narration style -- i mean that as a complement. His voice has great tone and i'm almost convinced it's Kipling himself. And then there are these loonnnggg pauses ... that make you think you've come ... to the end of the reading... but no. Many thanks for this excellent contribution, Tim. TheBookworm (Manchester, UK)

A more nuanced view of Kipling

I appreciate the narrator's more symphathetic view of Kipling's humane nature as presented in his introduction. The knee jerk pigeon holing ( to mix metaphors) of Victorian men as racist is indeed tiresome. How anyone who has read Kim cannot grasp the deep understanding and consuming interest Kipling had for India's complex culture is beyond me. The narrator brings out Kipling's subtle presentation of other societies through his careful cadence and meaningful pauses.

A little dry in places ~ but enjoyable nevertheless especially for Globe Trotters!