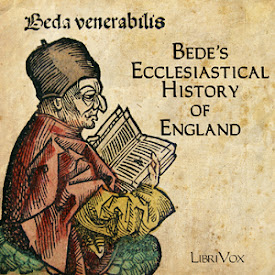 Bede's Ecclesiastical History of England is a work in Latin by Bede on the history of the Christian Churches in England, and of England generally; its main focus is on the conflict between Roman and Celtic Christianity. It is considered to be one of the most important original references on Anglo-Saxon history. It is believed to have been completed in 731, when Bede was approximately 59 years old. Divided into five books, it covers the history of England, ecclesiastical and political, from the time of Julius Caesar to the date of its completion (731).

The History of the English Church and People has a clear polemical and didactic purpose. Bede sets out, not just to tell the story of the English, but to advance his views on politics and religion. In political terms he is a partisan of his native Northumbria, amplifying its role in English history over and above that of Mercia, its great southern rival. While Bede is loyal to Northumbria, he shows an even greater attachment to the Irish and the Irish Celtic missionaries, whom he considers to be far more effective and dedicated than their rather complacent English counterparts. His final preoccupation is over the precise date of Easter, which he writes about at length. It is here, and only here, that he ventures some criticism of St Cuthbert and the Irish missionaries, who celebrated the event, according to Bede, at the wrong time. In the end he is pleased to note that the Irish Church was saved from error by accepting the correct date for Easter. (Summary modified from Wikipedia) (13 hr 6 min)

What a treat to find this treasure read so well!

generally well read from a range of contributors, thank you!

David Salisbury should have read the entire book

David Salisbury should have read the entire book he makes the book 100% more interesting then the others the book go's well with his accent and I'd rather listen to him then anyone else to bad he only does 1 chapter... wish he did more..