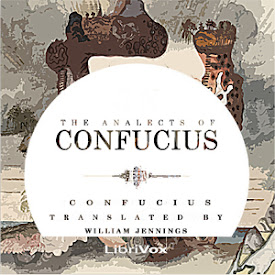 The Analects of Confucius

The Analects, or Lunyu, also known as the Analects of Confucius, are considered a record of the words and acts of the central Chinese thinker and philosopher Confucius and his disciples, as well as the discussions they held. Written during the Spring and Autumn Period through the Warring States Period (ca. 475 BC - 221 BC), the Analects is the representative work of Confucianism and continues to have a substantial influence on Chinese and East Asian thought and values today. William Jennings was a rector of Grasmere, and late colonial chaplain. He served at St. John's Cathedral in Hong Kong. (Summary by Wikipedia and Jing Li) (3 hr 32 min)

sayings from a humane & practical philosophy

This is a mix of proverbs from Confucius and of short conversations with his disciples. Tradition dates him older than Socrates, but from what I have understood the closest western parallel to Confucian philosophy represented in the analects is Stoicism. Very capably read. William Jennings produced a clear translation in English for modern ears.

Essential classic of the world’s literature. Officials in any governmental post should strive to emulate the ‘superior man’ of Confucius. Well read, though treble was a tad harsh.

Good audio recording and voice. The stories are ok. Not the most engaging for me, Confucius isn't as interesting as I expected it to be.

Very well and clearly read. A classic and certainly worthwhile for those so inclined.

I like Confucius because he is a BIPOC. However, as a college educated white liberal, I realize my position of inherent power. I must use my power to criticize Confucius for not doing enough to raise his fellow oppressed peoples. Confucius ignored the contribution of LatinX's to the Confucian discourse. Also he fails to rail against the poor undocumented guest workers being put in cages by Donald Trump. We need to restrict his teaching untill he can take a more holistic approach to pursuing social justice. Any work that does not explicitly acknowledge the plight of each and every oppressed class of people is Raycyst. His thoughts on 'the superior man' are paternalistic. The parent and the family unit must be sacrificed on the alter of social justice. Confucius is the yellow face of white power. Maybe we can erase all his writings and replace the with the collected works of George Soros. We can keep his role as credited author(he is a BIPOC after all). But his words are problematic