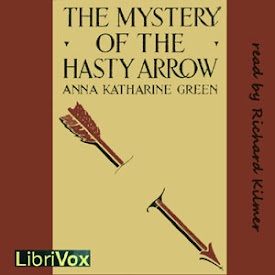 The Mystery of the Hasty Arrow

It is the noon hour at a museum in New York City. The date: May 23, 1913. The weekday, attendance is light; the attendees are scattered between two floors. Suddenly a cry rings out from the second floor. Scrambling to Section II, the museum director discovers a teenage girl dead with an arrow through her heart. An older woman hovers over her whispering incoherent phrases in the girl's ear and offering incomprehensible answers to the director's questions. She is the only witness to the crime, or accident, as the case may be. How will the feeble, 83 year-old Mr. Gryce unravel this mystery when this witness is apparently insane?

Anna Katharine Green was noted for her scientific approach to the murder mystery. In The Mystery of the Hasty Arrow she breaks more ground with her in-depth study of the psychological interplay between the murderer, the victim and the witnesses. Although more quietly paced, this mystery presents many elements of a current psychological thriller: blind ambition, narcissism, obsession and betrayal. Green adds a peculiar twist with the fact that two heartbroken relatives of the victim sacrifice virtually everything to protect the murderer.(Summary girlbooks/blog.com ) (10 hr 49 min)

in defense of Richard Kilmer

I'm sick of reading how people feel so free to criticize Mr. Killer's reading. It's true he does not use the inflections, or dialects/accents that many other readers use. However, his tone is not monotone. His voice is pleasant and soothing. There are many other readers who could take a lesson from him! However, I'll not criticize them publicly as long as such s rich store of literature is available to listen to for free or until i, myself, am willing and able to be a volunteer reader myself.

At the beginning you're hit with 3 mysteries only to later get even more plus a surprise! To start off you'll wonder who killed the girl, why is her mom acting strange, & did the husband of the witness die as she envisioned? A great mystery story even though it did drag a bit at one point & if I think that even a best friend wouldn't go to such an extreme end. The latter seemed ridiculous which is why I can't give 5 stars. It is still a worthwhile listen for sure. The reader is so NOT monotonous but his voice is beautifully soothing so just don't listen when sleepy. I wish most volunteers had such a voice!

Detective Gryce and Sweetwater investigate the murder of a young girl killed by an arrow in museum. The mystery that unfolds is unexpected, has its usual twists and turns, but the end is still a surprise. It's a story of love and devotion, friendship and hate, as well as sadness and the lowest nature of humankind. The plot is tight and well written. Any AKG fan will enjoy this book. Richard Kilmer does an outstanding job reading this story. I highly recommend "The Mystery of the Hasty Arrow."

Loved it. A compelling story, well written and very well read (except for the afore mentioned mispronunciation of the word 'escape'). At first I thought it began too slowly and was about to move on to another read, but the story does unfold in ever so many

this is a sad story about a psychopath, two emotionally unstable and one innocent person. The reader did a good job, but had a strange cadence. the book is extremely wordy which made it seem very long. I cannot recommend this book.

This was one of the most clever

Of course reader is the finest! Story has 0lot twists that are so good, that I was surprised.

Wonderfully read by Mr. Kilmer. His somber tone did this tragic story justice. I've created a new list after hearing this book..."Have Another Listen."

The Mystery of the Hasty Arrow