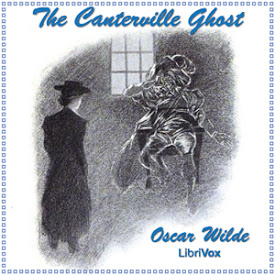 The American Minister and his family have bought the English stately home Canterville Chase, complete with the ghost of Sir Simon de Canterville - blood-stains, clanking chains and all. But these modern Americans will have no truck with ghostly goings-on, and set out to beat the spectre at his own game. (Summary by David Barnes) (1 hr 23 min)

All the light-hearted prose of a Scooby Doo episode but with 19th Century style and turn of phrase. A quick "read", this is a fun and enticing story that highlights American culture of the time, which is not far from modern perceptions of Americans (good and bad). The reader was also excellent apart from an induced speech impediment for one character voice (Lord Canterville).

Wilde used a myriad of comic sources to shape his story. Thomas De Quincey's ‘‘Murder Considered as One of the Fine Arts,’’ a satirical essay, is one apparent source. Wilde would also have been aware of Jane Austen's Northanger Abbey (1818), a parody of the Gothic novel so popular in the early nineteenth century. Wilde's own experience on the lecture circuit in the United States undoubtedly helped him ridicule stereotypical American behavior. Indeed, one of the major themes in the story is the culture clash between a sixteenth-century English ghost and a late nineteenth-century American family. But the story also examines the disparity between the public self and the private self, a theme to which Wilde would return again in his later writings. Many thanks to David Barnes for his excellent recording. A great pleasure to listen to!

What is an old-fashioned ghost to do, when the new inhabitants of the house refuse to be frightened? Why, they even use Pinkerton's Champion Stain Remover and Paragon Detergent on the blood stain that has been on the rug for over a century! Rotten Americans... Humorous tale with a touching ending, wonderfully read by David Barnes.

Amusing indeed. And you won’t find a better narrator, ever. Comically, the reviewer preceding me liked the tail but mentioned that the narrator made a mistake in giving one of the characters a speech defect. No! That’s exactly how an upper class of some English speakers talk!

I have loved this story since I was a kid and quite enjoy listening to it now during my meditation periods. The reader has a wonderful voice and adds enough humour that I can picture the different characters perfectly! Thank you for an awesome job!?

the whole story is so much satire and stereotypes and general hilarity made funnier by the reader's somber voice. the reader was excellent. definitely adding him to my list of favorites. I will probably come back to read this again.

Despite, without doubt, very much worth the time of ones's day and not in any way lacking of comedic enjoyment, The Canterville Ghost lacks the sharp social critique usually displayed by Oscar Wilde in his works.

One Eyeball Coming Up!

Very, very, cute. If you need a grin and a chuckle, this tale is for you. Narrator seems very British. Sounds like the actor who portrayed Sherlock Holmes on the television recently.