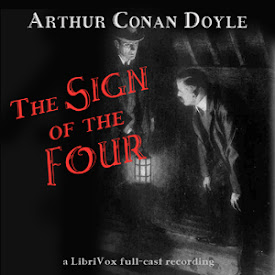 The Sign of the Four, the second of four novels featuring Sherlock Holmes, has a complex plot involving India, a stolen treasure, and a secret pact among four convicts and two corrupt prison guards. Some of Holmes's less savory habits are revealed, and Dr. Watson finds romance. In this dramatic reading, LibriVox volunteers bring Sir Arthur Conan Doyle's classic characters to life. (Summary by Wikipedia and wildemoose)

The Science of Deduction

The Statement of the Case

In Quest of a Solution

The Story of the Bald-Headed Man

The Tragedy of Pondicherry Lodge

The Episode of the Barrel

A Break in the Chain

The End of the Islander

The Strange Story of Jonathan Small

I really enjoyed this version of The Sign Of Four. Thought the vouce overs of each chacacter was pretty good. I have read and listened to just about everything out there on Sherlock Holmes over the last 55 yrs and still enjoy nice little presentions like this. Thanks to all the readers in the dramatic reading and to Librivox for giving it to us. Give it a listen I think you will like it.

Very enjoyable twists & turns to get to the surprise ending. - may a blackguard never win and get their just deserts

A fresh take on a classic tale

Bravo to this wonderful group of readers! It is no small feat to create such a cohesive end product of so many pieces of performance! And to the listeners who complain of the women reading men's parts, I can only say, Are you even serious!? Listen to individual performances by Laurie Anne Walden, Elizabeth Klett, or Ruth Golding, to name just a few favorites, and you will hear them read each individual character with such nuance of tone and expression that each character comes to life regardless of age, sex, profession or country. Beautifully read and performed!

That was so cool...and the readers were awesome. They also did a dramatic reading of the Hound of the Baskervilles and I had been wishing they’d do another one and then I stumbled on this reading...I was so happy and it was great except that thing about Holmes and the cocaine so I can’t give it a full five stars.

definitely check it out

Excellent story, and pretty good voice performances. The only reason I didn't give it 5 stars was because much of the final chapter seemed to drag on forever... but great ending. The story had mystery, thrills, romance, and comedy.

This was my first lvox listen and I really enjoyed every bit of it. Some voices were too low a volume so I had to rewind and listen to them again but the voices fit really well. Good work!