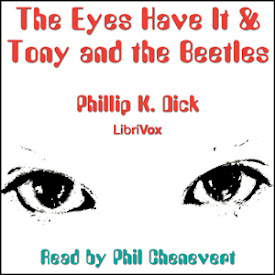 The Eyes Have It & Tony and the Beetles

Aliens have invaded the earth! Horrible one celled creatures disguised as normal human beings ! Well, at least that is what it seems to the author. Yes, The Eyes Have It is a whimsical story, making gentle fun of certain writing styles, but only a topflight science-fictionist like Philip Dick , we thought, could have written this story, in just this way. Tony and the Beetles takes place far in the future when Earth's enormous colonial empire is well established but the question is, how long can it last? 10 year old Tony grows up fast when history catches up with the human race. A sobering look at human history .. and our probable future. Two very different stories but both entertaining. (Summary by the magazine editor and Phil Chenevert) (0 hr 42 min)

The Eyes Have It

Tony and the Beetles, part 1

Tony and the Beetles, part 2

These stories were more of biographical and intellectual interest. They didn't provide me the immersion ("entertainment?") that I generally get in his more mature work. That darn 70 year copyright horizon must be messing with it. Already in his early 20s, Phil's preoccupation with identity, and with reasoning his way out of paranoid conundrums, can be seen. "The Eyes" must have sold for a few much needed $, but is basically a juvenile joke spun out past the punchline. The theme in "Tony" was much deeper, if a bit awkward. I don't know Phil's biography well enough to know his deliberate intent in 1953, but the allegory about American racism, embedded in the tale of American imperialism, leapt out at me. He clearly recognized the brother humanity of a black working class, and the sadness of its impermeability for his own caste. His concern with Nazi, Fascist, and oppressive domination in general must have come through from his childhood. i wonder if that presages in some way "The Man in the High Castle."

The first story was absolute comic genius. A writing lesson, courtesy of Phillip K Dick. Mind your metaphors, kiddies! Keep your eyes peeled! Um....well, maybe not.... The second is one which should be required reading in every classroom in America. Excellent narration by Phil Chenevert.

The first story is a study in misunderstanding and conspiracy theory, but in a funny way. The second story is thought-provoking. What we see here is what happens when children are introduced to prejudice based on race. At first, they play and are friends, and then things change and the parents influence them to also change. Innocence is lost, and the eyes are no longer color-blind. Especially note how the viewpoint of the main character changes due to how his friends treat him. I think this is a story that schools would do well to review with their students. It casts a light on social structure without inflaming the passions of people. Excellent work by Phil in both reading and selection. Thanks!

NOT a prejudiced story.

after listening to this story, I can only believe "MacKenzie" 's review reflected his own prejudice. Tony and the Beatles beautifully shows how fighting violence with violence and prejudice with prejudice only leads to death and sorrow. the victimized party responded to their 100 year victimhood by trying to murder an innocent child. this led the child to lose his compassion for them. it radicalized the child. this story was beautiful.

that the second story would be a good way to introduce the subject of racial prejudice but it also would be a good introduction to the long term effects of colonialism and war. What a sad, scary and utterly honest way of looking at ourselves.

The stories were just "okay" , Phil's reading is what made it worth listening to. he's one of the best readers at LibriVox.

The Eyes Have It was very funny. The Beetles was good, but not at good as his other work.