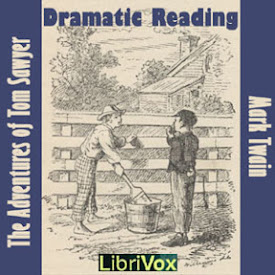 Growing up on the banks of the Mississippi river, a mischievous boy named Tom Sawyer spends his days getting into one scrape after another. Tom's constant cleverness, superstition, trickery, and daring make him a handful to raise, and his Aunt Polly declares that she has "never seen the beat of that boy!" Tom is essentially good-hearted, however, but when he is witness to a horrible crime, his courage and integrity are tested beyond anything he ever expected. A note to parents: The Adventures of Tom Sawyer is considered a children's classic, but contains racial slurs which, although "acceptable" in the time and place of the story's setting, will likely offend modern listeners. (Summary by Eden Rea-Hedrick)

The Adventures of Tom Sawyer

I didn't know if I wanted to bother with this book, I'd read it as a kid and it was ok. I'm glad I listened. As an adult it was a different book. The readers are excellent. Even if you have read it before, listen again it's worth it.

I enjoyed this recording very much. My only comment would be that I could not hear Tom's part as well as the other characters. The reader did an excellent job with Tom's accent, the reading. The rest of the readers did a great job. Thanks for a great time.

Good reads all the way around.

I love it!! I read the book in school, and didn't like it very much. But now I like it because the voices make it more enjoyable!💖

it was good, but Toms voice was a little muffled and some of the men had woman voices... But I enjoyed listening to it for school

Enjoyed the dramatization reading but some of the characters are very flat and don't speak with as much emphasis as others.

It's hard to get into the book when some voices aren't suitable for the character. For example: Joe had an Indian accent..

It was pretty good. It had a great ending. The beginning was very very slow, though