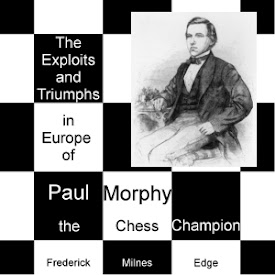 The Exploits and Triumphs, in Europe, of Paul Morphy, the Chess Champion

Paul Morphy, born in New Orleans in 1837, was considered the greatest chess player of his era. He was a child prodigy who learned playing chess simply by watching family members play, and when he was only 9 years old, he was hailed as the best chess player in New Orleans.
This book describes Morphy's trip to Europe, i.e., England and France, where he wanted to play the European Champion Staunton, a match that never came about as the correspondence included in this book shows. He did play - and beat - virtually every other strong player in Europe though, and tales of these matches and people make up a large part of this book. After his triumphs in Europe, Paul Morphy was considered the unofficial World Chess Champion, as official championship tournaments were only held from 1886.
Morphy retired from chess in 1859 in order to devote himself to his law practice. He died from a stroke in 1884. (Summary by Availle) (5 hr 38 min)

Morphy Prepares to Start for Europe

The Match Between Morphy and Harrwitz

Continuation Of the Match With Harrwitz

Morphy and the French Amateurs