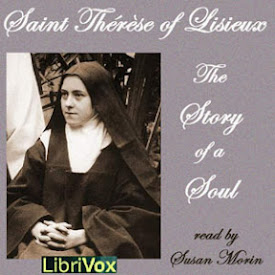 The Story of a Soul (Version 2)

She is also known as St. Thérèse of Child Jesus. She was born at Alençon, France, 2 January 1873; died at Lisieux 30 September 1897. When she was fifteen she applied for permission to enter the Carmelite Convent, and being refused by the superior, went to Rome with her father, as eager to give her to God as she was to give herself, to seek the consent of Pope Leo XIII, then celebrating his jubilee. He preferred to leave the decision in the hands of the superior, who finally consented and on 9 April 1888, at the unusual age of fifteen, Thérèse Martin entered the convent of Lisieux where two of her sisters had preceded her. The account of the eleven years of her religious life, marked by signal graces and constant growth in holiness, is given by Soeur Thérèse in her autobiography, written in obedience to her superior and published two years after her death. In 1901 it was translated into English, and in 1912 another translation, the first complete edition of the life of the Servant of God, containing the autobiography, "Letters and Spiritual Counsels", was published. Its success was immediate and it has passed into many editions, spreading far and wide the devotion to this "little" saint of simplicity, and abandonment in God's service, of the perfect accomplishment of small duties. The fame of her sanctity and the many miracles performed through her intercession caused the introduction of her cause of canonization only seventeen years after her death, 10 June 1914. Thérèse was beatified on 29 April 1923 and canonized on 17 May 1925, by Pope Pius XI, only 28 years after her death. (Summary by Wikipidia) (13 hr 40 min)

A Pilgrimage to Rome

The Night of The Soul

A Canticle of Love

Motto and Days of Grace of Soeur Thérèse

The narrator is good at avoiding errors and prounouncing French words well, but she reads extremely slowly and fairly dully and you can actually hear the distracting sound of her saliva/spit. Recommendations: listen at 1.5x speed and her pace becomes that of a regular reader. Adjust the treble significantly to mask the spitting. Makes it much better.

actually, it's not a bad reading at all. slow,yes, but very ' contemplative'. it's nice to hear from this book, while you do your chores or at leisure... chores don't overpower the reader....

It an really great story, but the reader’s voice is a little hard to understand. Over then that it is a good story I would recommend.

A warm and inspirational audio.

Thank you for the audio. The material of the book is straight from heaven. The voice is beautiful.

Loved the reader and the book. Will probably listen again