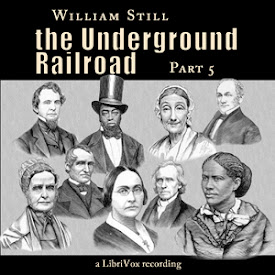 "I congratulate you that, after much patient research, careful preparation, and untiring labor, you have completed your voluminous work on "THE UNDERGROUND RAILROAD." I am sure your work will be found to be one of absorbing interest, worthy of the widest patronage, and historically valuable as pertaining to the tremendous struggle for the abolition of chattel slavery in our land. No phase of that struggle was so crowded with thrilling incidents, heroic adventures, and self-sacrificing efforts as the one you have undertaken to portray, and with which you were so closely connected, to wit: "THE UNDERGROUND RAILROAD." While it will be contemplated with shame, sadness, and astonishment, by posterity, it will serve vividly to illustrate the perils which everywhere confronted the fugitives from the Southern "house of bondage," and to which those who dared to give them food and shelter were also subjected." Wm. Lloyd Garrison

William Still is often called the Father of the Underground Railroad. Over 14 years, he helped hundreds of slaves escape to freedom in Canada. Still was committed to preserving the stories of the bondmen and he kept careful records of the many escaped slaves who passed through the Philadelphia “station”. The Underground Railroad was published in 1871 from Still’s records and diaries. In bringing you these stories, Librivox volunteers are reading from the 1878 edition. (Summary by MaryAnn)

Organization Of The Vigilance Committee