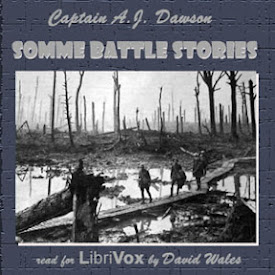 Stories of World War I warfare, published in 1916 in the midst of the war. (That's why names of persons and units are literally "blanked" out.) Alec John Dawson (1872 - 1951), generally known as A. J. Dawson (pseudonyms Major Dawson, Howard Kerr, Nicholas Freydon) was an English author, traveller and novelist. During World War I he attained the rank of Major, and was awarded the MBE and Croix de Guerre in recognition of his work as a military propagandist, a work the listener may want to keep in mind. (Terminology note: "Boche" means the Germans, singular or plural; "Blighty" means hospitalization in England; "The Push" means fighting in the Somme offensive.)

The Battle of the Somme (French: Bataille de la Somme, German: Schlacht an der Somme), also known as the Somme Offensive, was a battle of the First World War fought by the armies of the British and French empires against the German Empire. It took place between 1 July and 18 November 1916 on either side of the River Somme in France. The battle was one of the largest of World War I, in which more than 1,000,000 men were wounded or killed, making it one of humanity's bloodiest battles.... 1 July 1916 was also the worst day in the history of British Army, which had c. 60,000 casualties,... The British Army on the Somme was a mixture of the remains of the pre-war regular army, Territorial Force and the Kitchener Army which was composed of Pals battalions, recruited from the same places and occupations, whose losses had a profound social impact in Britain.... The Battle of the Somme has been called the beginning of modern all-arms warfare, during which Kitchener's Army learned to fight the mass-industrial war, which the continental armies had been engaged in for two years. This view sees the British contribution to the battle as part of a coalition war and part of a process, which took the strategic initiative from the German Army and caused it irreparable damage, leading to its collapse in late 1918. (Wikipedia, Battle Of The Somme) ( Wikipedia and david wales) (3 hr 15 min)

Chapter 2 The Spirit Of The British Soldier

Chapter 3 The Moral Of The Boche

Chapter 8 "We Don't Count Wounds In My Regiment"

Chapter 10 Brothers Of The Parsonage

Chapter 11 The Australian As A Fighter

Chapter 12 News For The O.C. Company At Home

Chapter 13 "Stickfast" And His Officer

Chapter 17 What Every M.O. Knows

Chapter 20 On The Way To London

<br />In <i>Somme Battle Stories</i> (1916), A. J. Dawson (<i>Finn the Wolfhound</i> etc) was stationed in England where he waited for hospital ships to arrive from France with their gruesome cargo. He interviewed injured soldiers returning from the front and retold their stories. The purpose was to inform the English public about the true nature of the war, something people were naturally curious about. The book is actually propaganda, one of four such books Dawson wrote while working for Military Intelligence during the war. He would later establish the propaganda department of the RAF in 1918. Everyone interviewed is cheerio, doesn't complain, can't wait to get back into "the push" and laugh away the "typewriters" (sound of machine gun fire). Good humor and an easy willingness to sacrifice life and limb are attitudes even among even the common soldiers. On the other hand it's realistic with depictions of soldiers dieing, killing, being sick, mud, rats, lice, etc.. the book exhibits a cognitive dissonance between the slaughter-filled stories coming home from Belgium, and the soldiers good humor and carelessness. Dawson himself fought in the trenches in 1914-15 and knew the reality. It was designed as propaganda, but it's also unintentionally subversive depending in your view. What we see here is the relentless reality of a new modern war shipping home a message of industrial scale death, making a mockery of the old fashioned perceptions of short but decisive engagements. The type of romantic attitude required to make a cavalry charge and prevail in a moment of triumph is exactly the opposite of what is needed to endure modern war which continues 24x7 and the enemy is rarely seen face to face. Although the book ends with the belief that a breakthrough had been made at the Somme and the dirty business of trench warfare was at last behind, this was fiction as nothing would change until the war ended in 1918.

We will not forget them.

The world could be a better a place if all on earth heard this mesmerising collection of stories. Thank you to the author and narrator for casting light upon these tales.

Somme from the soldier's view

That was good. Commentary from the mouths of soldiers who were actually there. This book takes you directly into the trenches and hand ti hand fighting.. For the record, 18,000. British soldiers died on July 1 1916 on the first day of the Somme offensive. The battle continued into Nov 1916! Amazing. The first ever use of the tank was during this battle in Sept 1016. Lewis guns were frequently mentioned. Mobile warfare, tanks, Lewis guns, were beginning to break the trench stalemate. I very much enjoyed this book.

An interesting example of British narratives collected from wounded infantry recovering in medical ships. It is clearly written for propaganda purposes (the author states he only met one melancholy soldier among the thousands wounded, all the rest were in 'high spirits'). Nonetheless first hand accounts fascinating, and a historical sample of the 'stiff British upper lip'.

Very well written and equally well read. Very good version of one man’s experience life in the trenches often describing only what is within an arms reach.

Stories that everyone should hear and be proud of. At first a little hard to listen to the reader but made up with content

Good book.. but you must know the British language