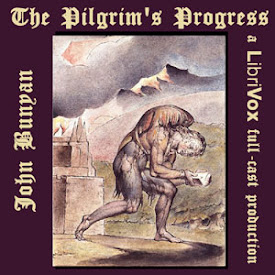 Probably the most famous allegory ever written of the Christian life, The Pilgrim's Progress follows the journey of Christian from his first encounter with the Evangelist, through his trials and doubts and as he meets various people who help and hinder him in his journey towards the Celestial City to meet his King. Part 2 follows the journey of Christian's wife and sons as they follow him along the same path past the Slough of Despond, the Castle Despair and Vanity Fair.

This version was edited in 1909 by the Rev. Jesse Lyman Hurlbut to update some of the more archaic language and streamline the theological arguments to make them more accessible to lay readers. His aim was "not to re-write the Pilgrim's Progress, for that would destroy its greatest charm, but to change the words here and there to simpler ones... to make it plain and interesting". Dramatized with voices to distinguish the main characters, we hope to make this classic accessible to people of all ages. (Summary by Beth Thomas )

Part 2, Chapter 4 - The Cross and the Consequences

Part 2, Chapter 6 - The Valley of Humiliation

This version of The Pilgrim's Progress has been gutted. All text referring to doctrine has been removed and word's changed to be simplified. The editor claims this is done so children can understand. Also, that Bunyun's theological ideology only applied to a bygone era. The truth of the matter is simple; the book has been made to conform to a social justice standard. Bunyun would take issue with the watering down of his text.

A wonderfully entertaining dramatic reading of this timeless classic

Superb Performance of the Classic

Heaven is my Home

Excellent narration of the story by many volunteers.

Having read this book many times, I must admit how enjoyable it was for me to experience this classic through a new (to me) format.

removed all the sermons or long doctrinal parts because they would be too difficult for children.

Spoiled by Christian being narrated by a woman. That's a shame.

I would have given you 5 stars if it wasn't for Beth Thomas if that is how you spell it. I don't think that Christian should be done by her. Cause Christian is a man not a Woman 😡 Other than that it's Great!

first part is better than the second

the quality of the readers is a mixed bag, some much better than others. I enjoyed part 1 much more than part 2, though part 2 had two or three precious moments in it.