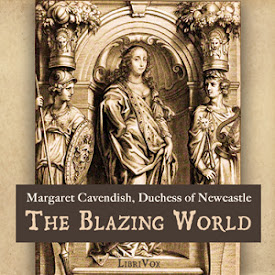 The Blazing World by Margaret Cavendish is, all at once, a satire, a treatise on natural philosophy, a work of proto-science fiction, and a defiant venture into a scientific world where women were not usually allowed. It tells the tale of a young Lady who is kidnapped by a man that tries to sail away with her. Through divine interference, however, the ship is tossed into a storm and everyone but the Lady perishes. Blown up to the North Pole, she inadvertently passes into to another world, the Blazing World, where she is almost immediately made supreme ruler. As the Lady begins to exercise her will, Cavendish lays out her own Utopia and discusses a wide range of scientific, political, social, and religious topics. But when a war breaks out in her home world, what will the Lady do with all power of the Blazing World behind her? - Summary by Sarah Terry (4 hr 2 min)

Reader gets a five! Material is rather dry, as you would expect from medieval texts, I am certain I got more out of it by listening rather than trying to read it on my own. Thank you for it!

Sci-fi before there was Science!

What an interesting peek into the scientific-minded in an era at the cusp of science as we know it today. Cavendish is fascinating. The reader channels her perfectly.

I wiuld characterise this as an early work of fantasy, and not scifi, as some would have it. Nonetheless it is fairly written and engaging, especially for the time period.

I really enjoyed the reader. The book itself is rather tedious at parts, but it's a great satire of the 18th century.