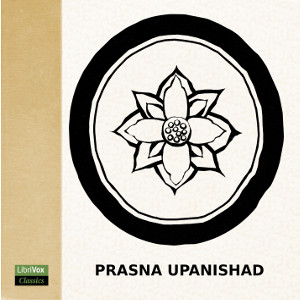 The word Upanishad (upa-ni-shad) consists of, "Upa" means "near;" "ni" means "down;" "shad" means "to sit." Thus, Upanishad is to sit down near the teacher to discuss, learn, practice, and experience. There are some 200 or more Upanishads. Some are lost and are only known about because of being referenced in other Upanishads.

Most of the Upanishads were kept secret for centuries, only passed on to others orally in the form of Shloka (a category of verse line developed from the Vedic Anustubh meter).

Prasna-Upanishad is one the 11 principal Upanishads dating from 6th BCE to the begning of the Common Era.

Prasana means question in Sanskrit. This Upanisahad contains six questions posed by six pupils to Pipplalda and answers to them by Pipplada.

The 11 principal Upanishads to which Sankara appeals in his great commentary on the Vedanta-Surtras are: Chandogya, Talavakara or Kena, Aitareya, Kaushitaki, Vajasaneyi or Isha, Katha, Mundaka, Taittirtiyaka or Taittiriya, Brihadaranyaka, Svetasvatara, and Prasna. They are also called the 11 classical Upanishads or the fundamental Upanishads of the Vedanta Philosophy.

The Upanishadic literature is not a religious scripture and is free from dogma and doctrines. It is not a part of any religion but is a philosophy for all times and for all. German philosopher Arthur Schopenhauer, impressed by the Upanishads, called the texts "the production of the highest human wisdom". Summary by Jothi (0 hr 29 min)

Just as beautiful and meaningful as the other Upanishads I have aquianted myself with. Though I would claim that this text is not in itself a self-explanatory piece for a reader who hasn't got any prior knowledge to enough of the terminology used. I would recommend for this upanishad to be listened to whilst able to stop to translate some of the key terms (unless of course already aquianted with some of the terminology of this themes priorly).

A must read for truthseekers

this is a very interesting text to read and understand

Great audio! I learned alot i will be listening again.